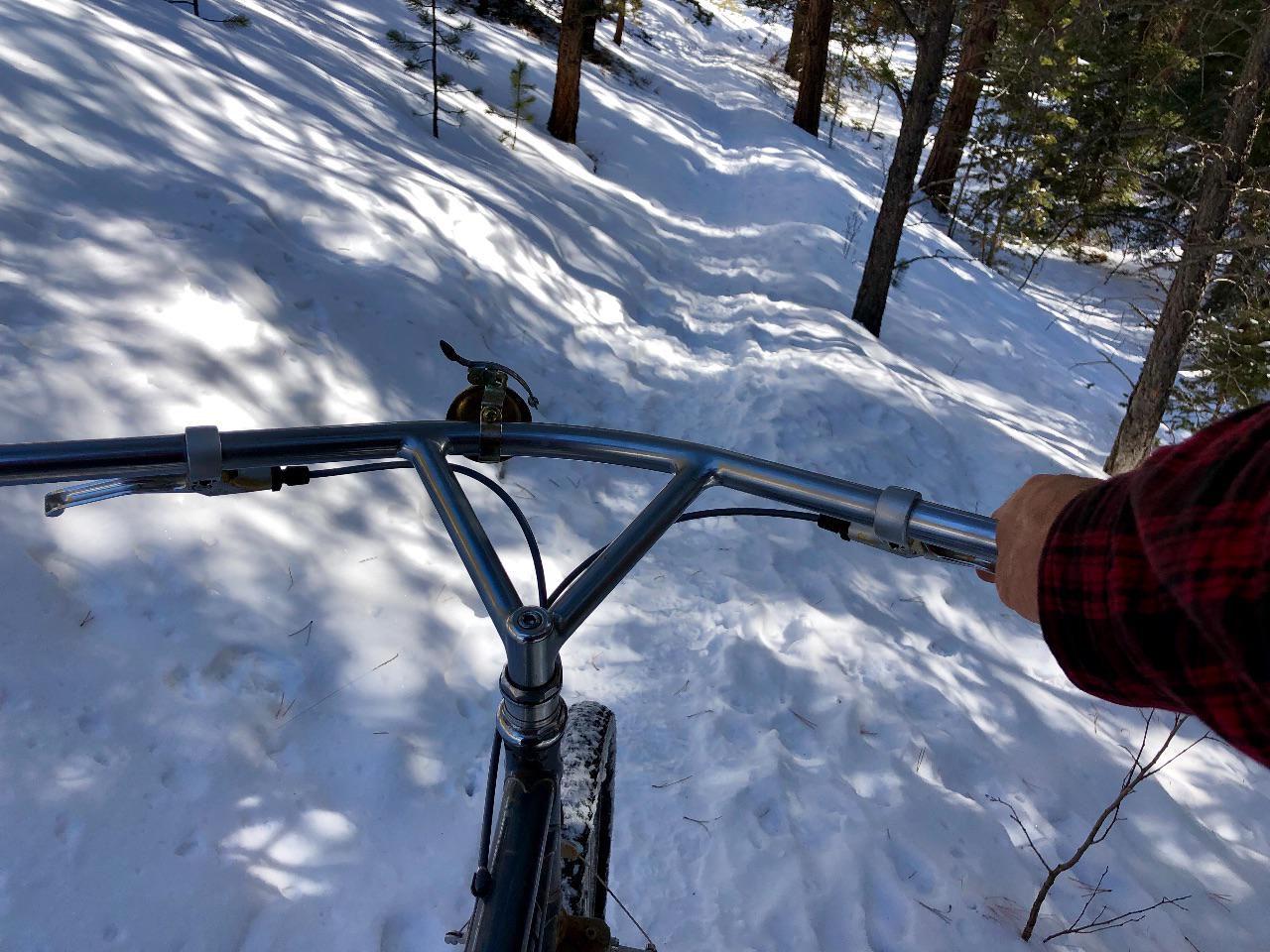 In which we explore the idiocy of riding a 2.1” fixed gear non-fat bike on snow.

Amazingly, 2.1” tires is very ridable most of the time, most of the places. I’ve gotten a number of questions about winter riding, so will lay out some of what I know from experience here.

Spikes? No. There is actually very little solid, smooth ice on the roads and trails I ride, and where it does occure I can easily see it and get around it, often on foot. Instead, I ride Schwalbe Racing Ralph 2.1” x 29 LiteSkin knobbies. Soft, supple, grippy knobbies link onto even subtle texture in ice, and there nearly always is subtle texture due to the freeze thaw cycles we often get daily. Grips even better on snow and snowpack.

This has transformed my wet/frozen weather riding. Conditions that used to freeze up my derailure and my brakes are no longer a factor. I always have backbraking (and usually my cantilever brakes too, even if they freeze and slip initially), and my drivetrain works no matter how much mud, wet then freeze, slush, and snow gets on it.

Chainsaw oil, applied judiciously one drop per pin, only when the chain “talks”.

This stuff is the delight of winter riding! Soft, light, lofty, fun. This falls below 20˚F. The colder it is the dryer it is. The natural silence of these rides is mind boggling. I can ride through a foot of champaign powder if I am the one breaking trail (not many people compete with me for the privledge. Grin.).

The stuff that falls at 20˚F and above. The warmer it is, the wetter it is. Dense. Easily feels like pedaling through concrete, hense the term snowcrete. Grin. Ridable up to 6”, but that is pushing it, and involves a lot of LCG (lowest common gear, aka pushing it). Some rides I work as hard going down hills as I do climbing up them with clear trail.

This is less fun. No matter the snow, a single person’s tracks changes the snow density with every footfall. Instead of steadily plowing through even snow, it’s like plowing through mini-walls of snow, each of which wants to change your speed and direction. Oof. Snow is much less ridable when one to 25 people have walked it before me.

Once more than 25 people (or so, I picked a somewhat random number) have walked the trail (including me), it becomes ridable again, but generally only on a 4” wide rail, with a 1” buffer on either side, before the snow plunges into the depths swallowing bike and rider into an abyss of nearly no escape. Or guffawing laughter and the delight of plunging into deep snow. Whichever you prefer. Grin. This is the trail in the photo above. Rideable, just.

On any given day, depending on a given square foot’s history of snowfall, sun exposure, wind exposure, temperature shifts, and a slew of other factors, the layers of snow change, making every ride different and adventurious. In the shelter of the forest, powder lingers, but emerge to a sun-soaked slope and chunky ice and snowpack dominate. Crusty snow on top, collapsing into deep powder below.

I can only speak for my Rivendell bikes, but having a bike that tracks true no matter the speed or incline and that puts weight so it is ballanced properly front to rear and that encourages adjustments to bars and saddle to fine tune these, makes a big difference.

I often see mountain bikers on the same trails with twitchy handlebars, struggling to keep a straight line as they climb. That’s got to be hard.

I recently shifted to the bullmoose handlebars in the photo, and they are brilliant for all riding. The wide hand position is fantastic for technical trails, giving me plenty of leverage to minimize terrain steer from all those footprints in the snow. Grin.

May God startle you with joy!